“The Professional Fellows Program provided me with a unique opportunity to look around and explore the wide range of services provided to people with disabilities in the U.S. as well as disability rights legislation." 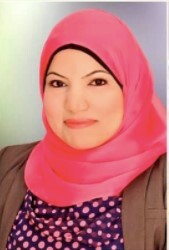 Meet Dr. Hayam Abdel Rashid Gamil from Egypt, Fall 2013 alumna of the Professional Fellows Program, facilitated by WorldChicago in partnership with Hands Along the Nile and the U.S. Department of State.

Hayam is one of Egypt’s leading activists for individuals with special needs. Her own experience living with a disability inspired her to advocate on behalf of others facing similar challenges. After a medical error at the age of two prohibited her from walking, Hayam underwent several surgeries and gradually gained limited mobility with the help of a prosthetic device and crutches.

Hayam’s career in activism began while she was working on her doctorate in Environmental Human Sciences at Cairo’s Ain Shams University. Hayam competed as a track and field athlete for the university’s Al Wafa Wal Amal (Faith and Hope) Club for people with special needs; later on, she got involved in charity and development work.

In 2012, Hayam joined the National Council for Disability Affairs (NCDA), an organization devoted to enforcing the U.N. Convention on the Rights of Persons with Disabilities. In this role, Hayam co-wrote many reports and recommendations that were submitted to the U.N. Committee on the Rights of Persons with Disabilities, the Office of the High Commissioner for Human Rights, the African Commission on Human and Peoples' Rights, and the Human Rights Council.

Hayam eventually became the Acting Director of the NCDA’s International Cooperation Department—which led to her participation in WorldChicago’s Professional Fellows Program. In Chicago, she completed a fellowship with the State of Illinois’ Department of Rehabilitation Services. The fellowship allowed her to learn about the role of legislative activism in integrating individuals with special needs into society. Reflecting on her experience, Hayam commented: “The Professional Fellows Program provided me with a unique opportunity to look around and explore the wide range of services provided to people with disabilities in the U.S. as well as disability rights legislation. It also equipped me professionally and enhanced my knowledge about all disability issues. It was really an amazing experience and I am sure that no other program could have provided me with all this...Thank you so much for enabling me as a young professional to contribute in changing the future for people with disabilities in Egypt.”

Upon return to Egypt, Hayam did just that. In 2015, she was nominated for parliamentary elections as a member of the Sahwat Misr (Egyptian Renaissance) Party, on a platform designed to represent Egyptian individuals with special needs. Her other accomplishments include helping to draft the Egyptian Law on the Rights of Persons with Disabilities and co-founding the Haki (My Right) Society for special needs individuals.

We thank Hayam for sharing her story with us and congratulate her on her amazing work to build a more inclusive society for people with special needs.